Sometimes when I'm quietly reading in my room, I'll hear a clucking outside the window where the bird feeder is. If I carefully look out I might see a flock of turkeys squabbling and pecking at the dropped bird seeds (and seeds I put out for them.)

I live in quite a rural area and they like to hang out in the fields and the small bush around my home. 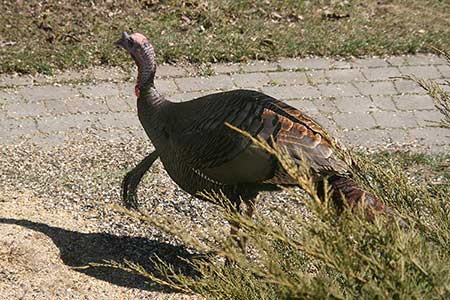 On his chest, dangling down is a tuft of bristly feathers called a beard. Mostly males have them but sometimes female also get beards.

I live in the Niagara Region of Southern Ontario. Turkeys have been re introduced and seem to be doing well. I find them endearing and feed them.

I'm not the only one, it's nice to hear the neighbours talk about them and worry if they don't see the turkeys for a few days. 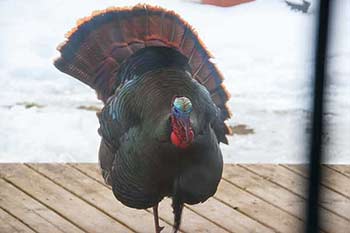 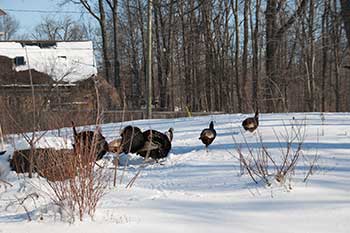 In late Winter / Early spring, the turkeys start displaying their tails. The males go around trying to discourage other guys and trying to impress the ladies. Of course the ladies just pretend to ignore them. The group on the side of the snowy hill has 2 fluffed up males.

The turkeys not only spread out their tail and wing feathers, but fluff out the rest of the feathers and their wattles turn brilliant red with blue highlights.

The Wattles are the droopy fleshy bits that the turkeys have below their beak. The snood is the one that often dangles over the beak. In just a few minutes, when the turkey starts to get excited or angry, the wattles will get huge and will turn a startling red. Lovely blue patches often appear to complete the ensemble. 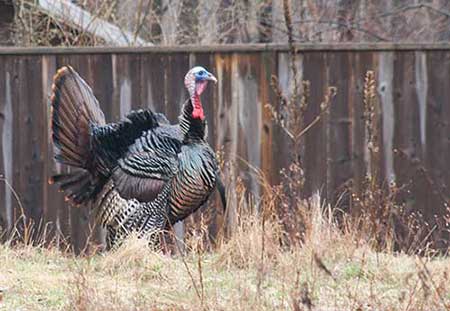 A turkey that is showing himself off will inflate and turn this way and that, while sort of shaking everything. He makes sure that the full width of the tail is plainly visible to the offending male or chosen lady. Often 2 males will circle each other trying to look as impressive as possible.

I've only seen turkeys gobbling when males are arguing. I think it's an aggressive sound. Normally when they are just hanging around they cluck, much like chickens. 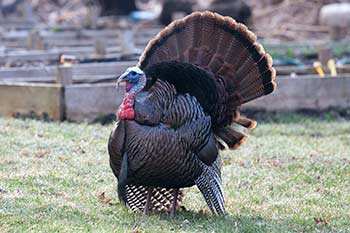 This poor guy put on an amazing show for the hens. It lasted almost an hour. They displayed an amazing amount of ego crushing indifference. I felt like yelling out of the window to tell him he was gorgeous and not give up. 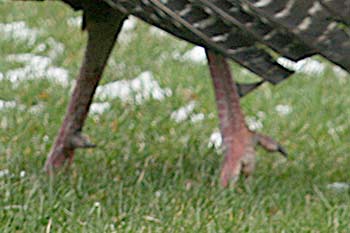 I've not seen males fight very much. The impressive display seems to work to discourage the looser without bloodshed.

Apparently the bigger the wattles the more testosterone the turkey has. I guess male turkeys compare wattles and snoods.

Male turkeys have impressive spurs and certainly could do serious damage to any rival. It's good policy not to get into fights if you can avoid it.

Audubon article on Turkeys has information on turkey life cycle. 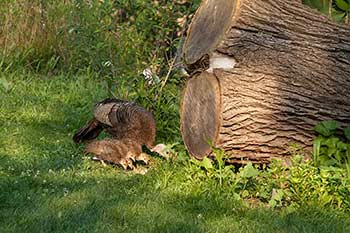 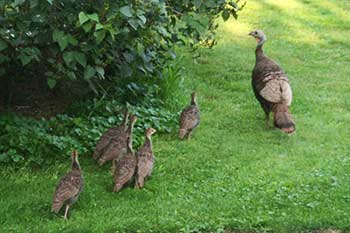 Early summer often means that turkey hens will have chicks. They lay eggs on the ground and are very quiet about it.

This mother brought out her babies when they had grown large enough and she felt it was safe for them to come to the feeder.

She kept them very close to her and did not mingle with the other turkeys. 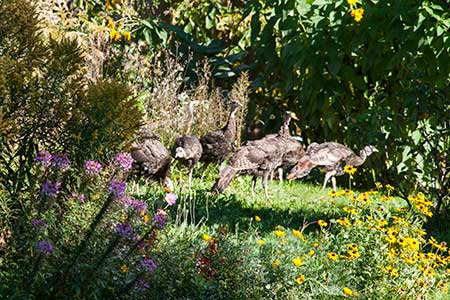 Later when they had grown some more, she allowed them near others and allowed them to roam around further afield. She kept a close eye on them though and one chirp called them back to her.

They eventually rejoined the group later in the summer.

Like other birds, turkeys maintain a strict pecking order and everyone has their spot on the social ladder. Higher ranking birds are quick to peck and chase away an individual with lower standing. Mothers are wise to keep their bird brained offsprings away till they are old enough to understand the system and stay out of trouble. 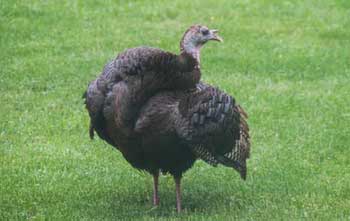 After a downpour, the lot of them were left shaking their feathers and trying to dry themselves a bit.

They fluffed up, wiggled around and used their beak to re arrange their feathers and try and dry up if they could. They all looked a bit soggy. Luckily it was not particularly cold. 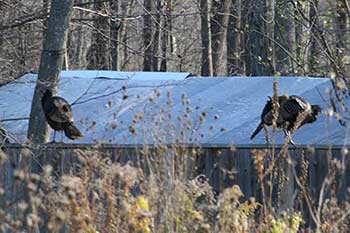 In the evening turkeys head out for the bush to sleep. By that time they have had a good day foraging and are full and content. There is a gathering period with clucking and gossiping, then they head out to roost for the night. 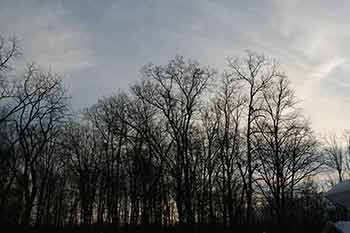 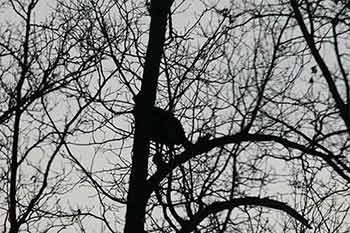 Turkeys fly well for short distances and with much flapping and commotion can go straight up a tall tree.

There are several turkeys in these trees with a detail on the right.

Sleeping high in the trees, protects them from the foxes and coyotes that would love a turkey dinner.

In the morning, not at the crack of dawn, turkeys will start calling to each other and after a good chat they decide to come down for breakfast. Again much commotion but eventually everyone is ready to head out for a new day of foraging. 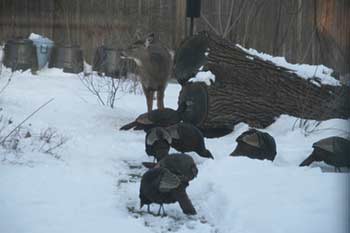 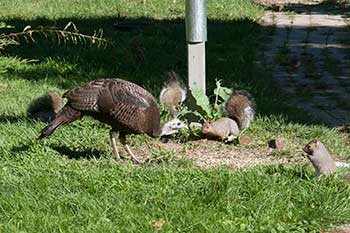 I watched while a flock of turkeys joined a deer eating seeds under the bird feeder.

Normally, both these animals are quite timid and will keep looking up and scanning for predators. Together they were much more relaxed. In particular the deer took comfort and did not look up as often with the turkeys also guarding. Once when a turkey sounded a heads-up squawk, everyone including the deer quickly looked up until they were happy there was no danger. I guess there is safety in numbers.

Much the same thing happened with this lady turkey was pecking at seeds surrounded by squirrels. Everyone was much more relaxed. 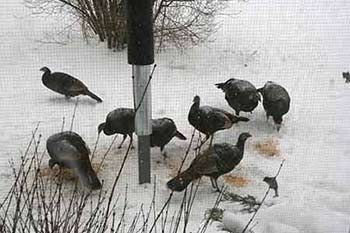 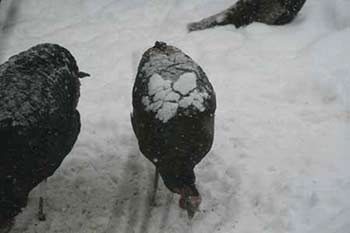 In winter the turkeys assemble in larger flocks and come regularly to the feeder. I don't think they much like the cold and deep snow but since the snow piles up on their back and does not melt, they must have good insulation at least. 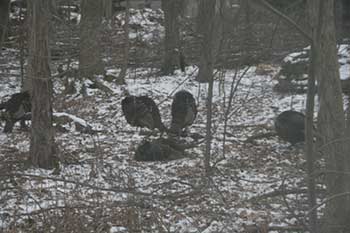 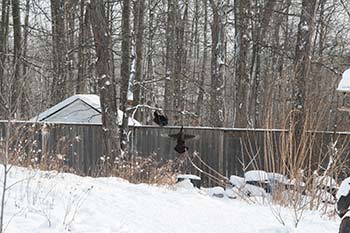 Late afternoon turkeys are hanging out in the bush. They are grooming, chatting and just relaxing. Some are sitting down and fluffing their feathers. They've had lots of food and it's almost time to go to bed. They are going over the day's event with their family and friends. They have a relaxed clucking tone.

Eventually someone decides it's time to head over the fence and into the tall trees for the evening roost. 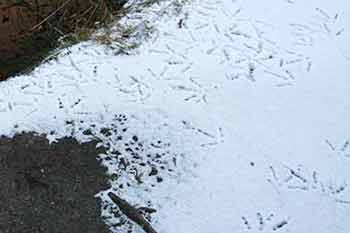 Turkey tracks in the snow. They walked over my porch and onto the walkway on their way to a little drink by the puddle then off to bed.

[HOME] [Email Christine]
Wikipedia has a nice informative article on wild Turkeys.
Cornell University has a page about Wild Turkeys.

Mastering Bird Photography: The Art, Craft, and Technique of Photographing Birds and Their Behavior