I like squirrels but they are greedy and very clever. I put seeds on the ground for them and enjoy their presence. 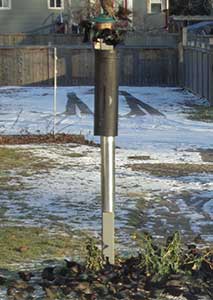 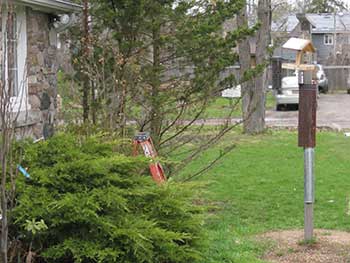 I've had bird feeders for years and the metal guards I have on the base have worked very well to keep both squirrels and Raccoons off the feeders ... until last year, when a pair of little fearless brothers figured out that by taking a desperate leap from the house they could just reach the feeder. It took them a season to perfect their style and by the end of the year they had taught the trick to the whole lot of squirrels that live around here.

My foolproof squirrel/raccoon guard is made of 2 pipes. The smaller shiny one fits very tightly around the 4x4 post. The second is a piece of black stovepipe that is held on by 2 screws and which can balance back and forth.

The baffle works really well if you don't have a house to jump from. Here is a commercial one if you don't feel like cutting a stove pipe yourself: Erva Tool Steel Pole Mounted Squirrel Baffle

Because they can now leap off the roof and bypass the squirrel guard I have to change my approach. 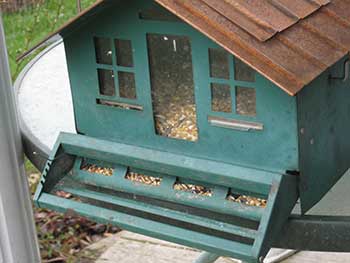 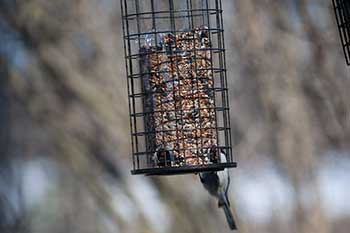 I've set up a couple of squirrel proof bird feeders and they work quite well. The green one closes when a large bird or a squirrel steps on the perch, I have it and I can recommend it. Perky-Pet 339 Squirrel Be Gone II Feeder Home with Chimney

The tension is adjustable. The second has a wire mesh that keeps the squirrels out, mostly. They can still hang on to the mesh and reach in for seeds that have fallen on the small base but it's one seed at a time and they don't bother much unless they are quite hungry.

I have some platform feeders that attracts the big birds, such as the mourning doves. Blue jays and cardinals seem to be able to get seeds from the mesh so along with the platform feeder so they are fine.

Who comes for peanut butter?

I've even had robins getting peanut butter, but that's not common. 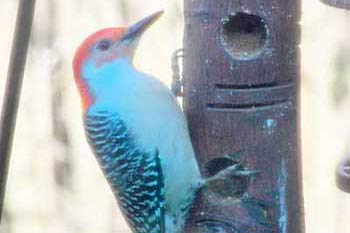 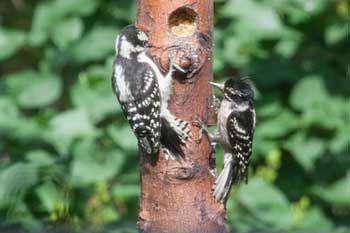 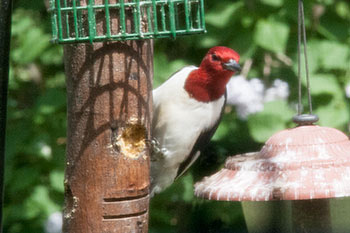 There are lots of red bellied woodpeckers and both downy and hairy woodpeckers are regular visitors. This mother downy woodpecker is trying to teach her baby to eat by himself and he is not so good at it.

The Red headed woodpecker is a rare and honoured visitor. He is absolutely spectacular. 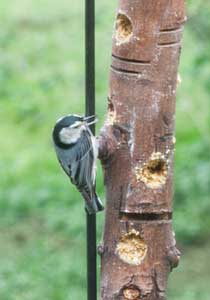 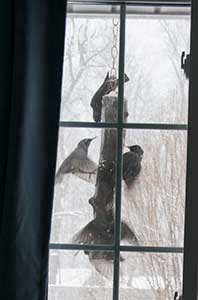 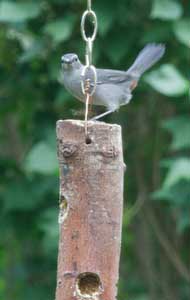 The nuthatch and starlings come regularly. Here the starlings are mobbing the feeder on a cold snowy day when food is hard to come by.

The lovely catbirds are frequent visitors and they will bring their babies to learn how to eat peanut butter.

The chickadees come regularly and occasionally the tufted titmouse will have a go at the feeder. 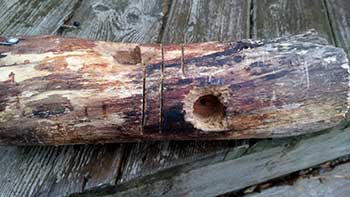 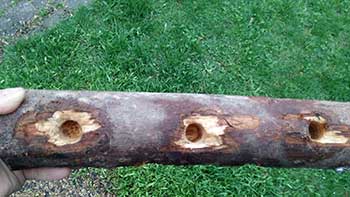 When the squirrels figured out how to leap and glide to the feeder they started chewing on them so they could get to the bottom and get the last drop of peanut butter. They are aggressive and few birds will challenge them so the birds started coming before the squirrels got up and after they went to bed.

At first I tried making the holes smaller and deeper and this helped but a hungry squirrel looking for a peanut butter fix is a persistent little chewing machine.

Finally I made a model that seems to be holding up and so far they are not spending much time trying to get the peanut butter.

The key to my success is lining the smaller holes with pieces of copper pipe. This is how I made the feeder. 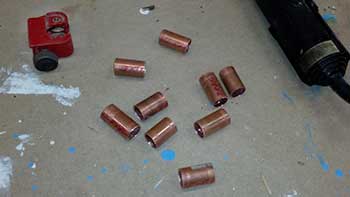 I went to the scrap pile and found a piece of copper pipe. I measured the outside diameter, it is 5/8 inch across. I made sure I had a spade drill bit that size, it's common size and if you bought a set it will have it. Spade bits are inexpensive and easy to come by.

I then cut the pipe in about 1 inch lengths. I didn't measure them particularly carefully. I used a little plumbing cutter that you tightens around the pipe as you turn it around till it's cut. A hacksaw would have worked just as well.

Cutting the pipe made a burr around the edges so I used a round file and sandpaper to smooth the edges. I would hate to hurt the birds or for that matter cut the mouth of the squirrels or my fingers, on sharp edges. That took longer than I expected but after a few minutes the edges were smooth. 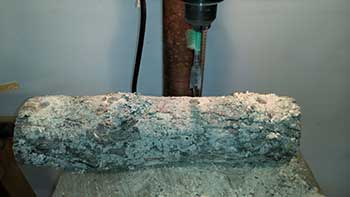 I went to the woodpile and found a nice rough piece of log. I'm using a round piece but a split log would work just as well. It's about 4 1/2 inches thick.

It was a simple matter to cut as many holes as I had inserts. I marked the depth at 2 1/2 inch deep using a bit of green tape. I used a drill press but a hand drill would do too. 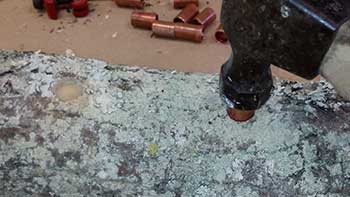 I used a hammer to tap in the copper inserts in the holes. I stopped hammering when the copper pieces were just proud of the top. The fit was quite tight except for one. I put in a piece of bamboo skewer tip and this tightened the fit perfectly.

The pipe doesn't go to the very bottom of the hole. I did not have enough left over pipe to go the full length but I don't think that matters. I don't imagine the squirrels will try chewing beyond the slightly more than one inch of the copper pipe. 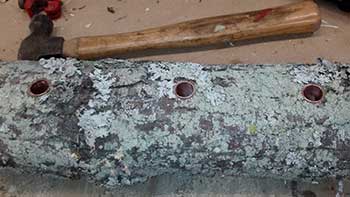 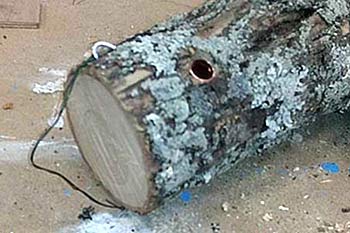 Once the inserts were in place all I needed to do was to add a couple of bent nails so I could attach a wire to hand the feeder. 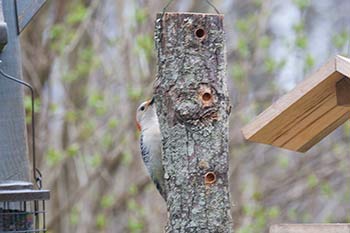 I couldn't wait to get the peanut butter in the feeder and test it out.

I missed photographing my first client which was a chickadee. They are quite brave and he did not hesitate to try out the new feeder. I then got several downy woodpeckers, one hairy woodpecker, a red bellied woodpecker and several squirrels. All this within a couple of hours of hanging. 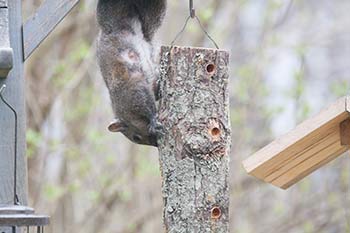 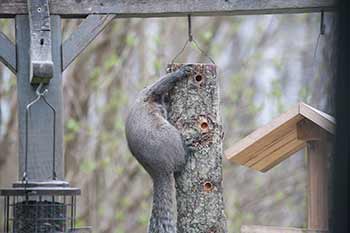 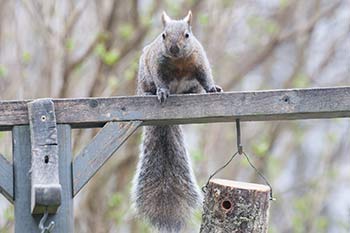 Since I had smeared peanut butter around the outside of the opening as well as in the hole, the squirrels ate that first. They then went in as far as they could get. This was just a bit deeper than a quarter inch.

When they reached that depth, which took no time at all, they went on to try the other holes. Eventually they gave up and left the feeder to the birds. I got 4 squirrels in the 2 hours since the feeder has been up and no more so far. Since I have well over 15, I know this because I saw 15 at once, it will take a bit of time for all of them to come and figure out the feeder is not a great place to spend the day anymore. They tried chewing but that brought no joy either.

I think I can claim success. If I wanted, I could fill the holes to within 3/8 of the edge and they would not be able to reach the peanut butter at all. The birds have had no trouble getting to the peanut butter with their long beaks and longer tongue.

I'm now thinking about how to fill the deep holes faster than with the knife I've been using. It worked but was slow and left some air bubbles at the very bottom where I did not push the peanut butter down enough.

Fast forward a day and I've solved the filling problem

See How I figured out a fast way of filling the many holes of the peanut butter feeder.