My raised bed garden dries out quickly as the plants grow. Plants are closer together than in a regular garden and watering can become quite a time consuming chore.

In my area there is very little topsoil and bedrock is only a couple of feet under. This means that there is not a huge amount of water reserves for any garden plant.

This year I put together an automatic irrigation system for the raised beds and so far it is working out very well. Being retired I do not have a huge amount of money to devote to projects, particularly since I already have a boat building project on the go.

I had used an irrigation system when all my plants lived in pots in my tiny back yard but I have moved since and the scope of the irrigation is much larger. 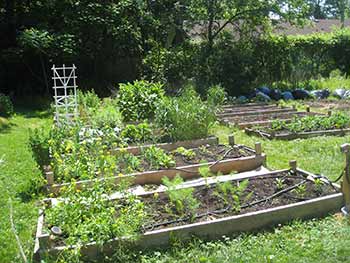 Designing the irrigation system and laying the main pipe.

I spent some time figuring out what the most economical way of laying the various hoses and tubing. I finally decided to run the main pipe along the edge of the 6 beds cross the corridor and come back up the length of the 4 beds.

I got a roll of black poly pipe. 100 feet long and 1/2 inch inside diametre and used this as my main pipe. I had some old hoses but not enough and they were quite damaged so I sprung for the new pipe. It's not very rigid and I had to be careful laying it out. Luckily it was warm out and the pipe had softened some.

Setting up the pipe in each bed 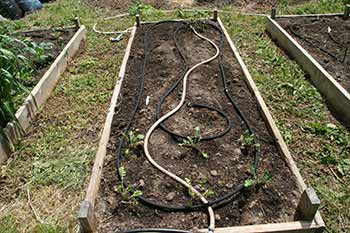 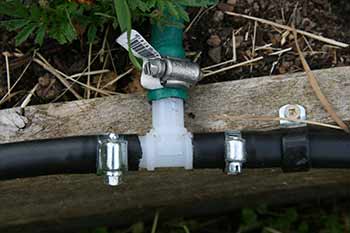 I cut up my old hoses in 10 feet lengths. These were going to bring the water from the main along the length of the bed.

I had a few nylon T junctions and used these to make a joint in the main pipe. It was easy to cut the black pipe, slip on the T junction and use pipe clamps to tighten them on.

I attached my lengths of hose the same way. It was much more difficult to put the hose ends on and eventually I got a pot of really hot water to soften the hose and added a bit of soap so it would slide on the top of the t junction. This worked.

Each junction was screwed to the bed with a metal hold down. I had a motley assortment of fasteners and used them to fix the pipe on each bed. 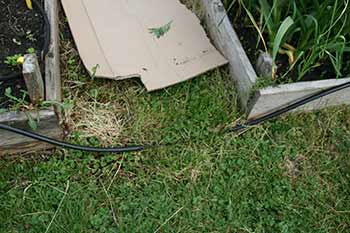 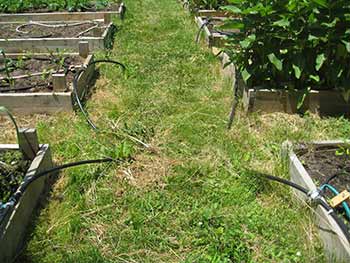 Where ever the pipe crosses a walkway, I plan to bury the pipe so it does not get damaged when I pass the mower. I did not bury the pipe immediately in case I needed to modify the position of the various bits. 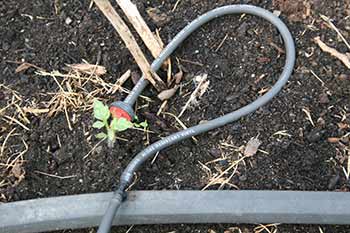 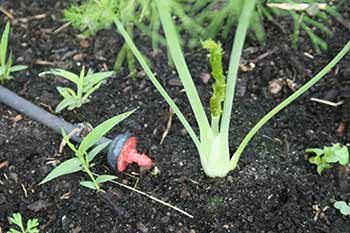 I intended to use little drippers going to each plant from the hose. I soon realized that it would take hundreads of the somewhat expensive little drippers and would be hugely time consuming to prepare the drippers on quarter inch pipe, pierce the hosing and install the drippers. I also thought that it would not be a very flexible system for next year's plants which might not be in the same place, or for a row of closely spaced plants.

These little drippers are really great if you have lots of hanging pots or if your garden does not change. They allow you to deliver water exactly where you want it and they are calibrated in various amount of flow. They come with a whole set of plastic fittings such as T junctions, right hand elbows, pressure reducers and narrow gauge hoses. I had quite a lot of pieces left over from before.

Instead I trotted myself to the dollar store and bought 14 soaker hose lengths. The hose is full of very small holes that drips water and soaks the ground. These hoses have regular hose screw connectors on one end and end caps screwed on the other end. 2 can be put together to make a longer hose. I also used a few of the drippers to fill in some spots that were not getting enough water.

Unfortunately this meant I had to have a screw-on end on my hose pieces. This took a bit of time but was not difficult. I already had several hose ends that are sold to repair damaged hoses and had to buy a couple more. 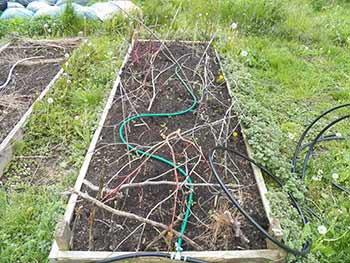 It took much longer than it should have to do this, because I put dozens of branches in my beds when I plant to keep the cats, rabbits, turkeys and whoever else likes to dig in my nice soft earth. I should have installed the hose before planting. Bad planning.

At this point I had installed a hose end at one end of the black plastic pipe and just clamped the other end shut. This allowed me to connect the irrigation system to the house water tap and test the system.

We have good pressure but it was not enough to drive the water to the very end beds. After a bit of thinking, I put a splitter on the house tap and fed the water at both ends of the black pipe. This solved the problem and allowed water to get to all the beds. It was not perfectly distributed and more water got to the beds closer to the water connection. 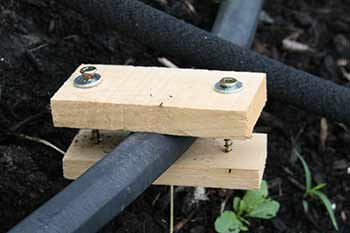 I needed a way of controlling how much water flowed in each individual beds. I made up 10 little wooden bits. When I tighten the screws the pipe is squeezed down and this reduces the amount of water going through. This worked really well to reduce the amount of water in some of the beds thus increasing the water available to others.

Eventually, when I have the system figured out, I can gradually replace makeshift parts with more permanent fittings. 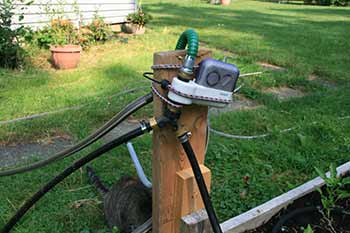 I still had from my previous watering system, a timer. It has batteries and is well sealed so it can be left outside. You can set how long the water stays on, the time it goes on and how often.

I had bought this timer from one of the gardening stores but the big box stores carry them. I'll put a link on the side bar to some that are available online.

The green pipe at the top of the timer is the water coming from the house. The 2 pipes at the bottom connect in a y splitter. Each of the 2 sides connect to the black plastic pipe that goes around the edge of the beds. 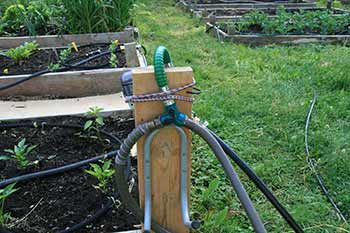 Once I'm satisfied that the irrigation system is working I'll fasten the hoses and timer properly. For now the bungee cord does the job.

The watering system has been on automatic for about a week now and is working well. I've been going around tightening my little wood clamps to even out the water distribution.

I had some leaks at the timer connections and had to take them apart, put in teflon tape and in once case boat sealing compound. I still have a couple of spots where I have connected 2 soaker hoses and they leak. What do I expect from dollar store gear! 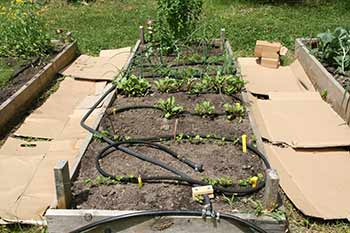 Because I had planted most of the beds with short rows across the beds rather than lengthwise, it took alot of time to arrange the soaker hoses and fix them in place. I used tent posts. 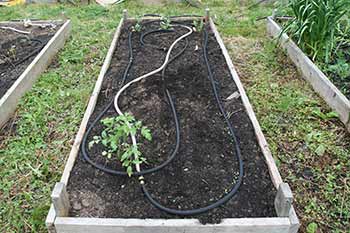 In one bed I was able to just lay the hose and plant and seed along the hose and this was fast and easy. Little seedlings are just starting to come up along the bottom hose.

How are the plants liking this

After watering, most of the bed still looks dry. There is a strip of wet ground around the plants only. This goes quite deeply. In the morning of the next day, the water has soaked across more but there are still some dry surface areas where there are no plants. All the plants seem to be getting enough water and the garden is growing very quickly so I'm watching but not interfering.

The watering system has been a brilliant success. Not only did the plants grow well but because the water was directed where the plants were and not over the whole bed, fewer weeds grew. I had to increase the length of time and I spent some time balancing the system by screwing and loosening various connections but it was a huge saving in time and effort as well as water. I will expand the system next year.

Drip system kit. That's how I got my first system going and it works really well for small areas. It's quite time consuming to set up because each plant needs a dripper head.
Rain Bird 32ETI Easy to Install In-Ground Automatic Sprinkler System Kit

I used a couple of splitters in my system. This one seems quite high end. Mine were cheap and nasty and I had to work hard to get them not to leak. You get what you pay for
2wayz All Metal Body Hose Splitter. Newly Upgraded (2017): 100% Secured, Bolted & Threaded. Easy Grip, Smooth Long Handles Garden Hose y valve. Bonus included: 10 Washers.