How to Grow Jack in the Pulpit from Seed 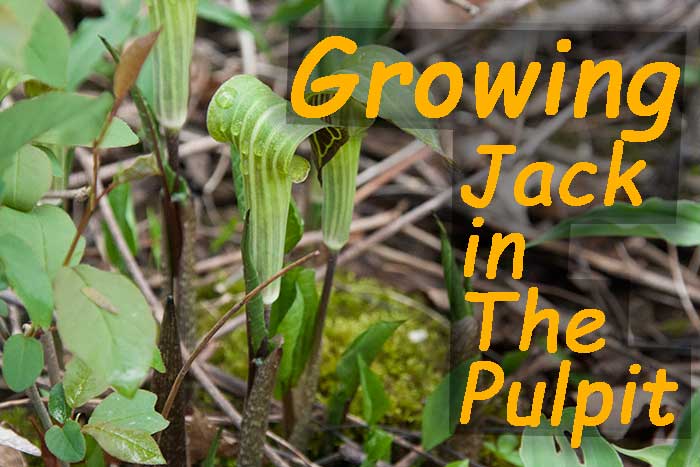 Jack in the pulpit,(Arisaema triphyllum), also known as Indian turnip, is a lovely and intriguing native flower. It shows itself in the early spring before the trees have leafed out. They then disappear leaving only their seed pod and a few inconspicuous leaves behind. It is quite easy to grow from seed. Here is how I did it.

Information about Jack in the Pulpit 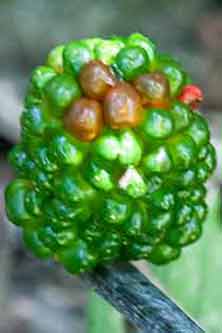 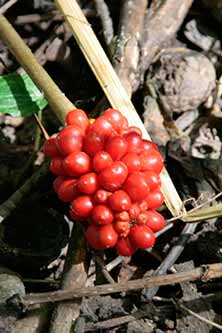 Fist step is to get some ripe berries. They start out green and gradually turn red as they ripen. In some areas they are protected and you cannot pick them. Often it's easiest to buy some.

Here are a couple of Amazon Suppliers in the US, and a private supplier from Canada. Jack-in-the-Pulpit, Arisaema triphyllum Seeds aka bog onion, brown dragon, Indian turnip, American wake robin - By MySeeds.Co (1 Pack)

In Canada:Fuller Native & Rare Plants have seeds and corms

If you intend to harvest some seeds it's not a bad idea to protect them with some wire mesh while they ripen. Several animals including Turkeys will eat them. 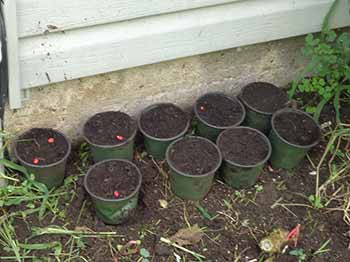 My first unsuccessful try was to get some seeds, there are plants around my house, and plant them in pots. Here the pots are in place but the seeds not buried yet.

I put them beside the shed where they would be protected but would get the necessary cold stratification needed to germinate.

The next morning I noticed that someone had gone and dug up every seed and presumably had eaten them. Squirrels? Mice? Voles? I don't know but that was the end of this experiment. I had no more seeds.

Take 2, Growing Jack in the Pulpit from Seed 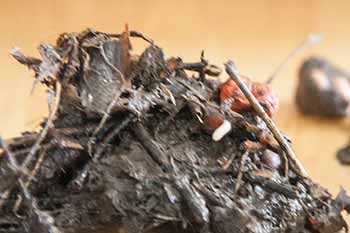 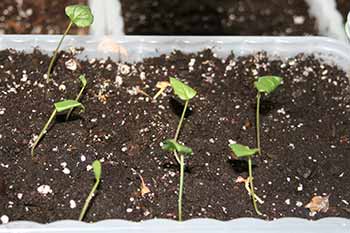 The next fall, I collected some seeds, they had already fallen on the ground and were mixed up with dead leaves and other organic matter. I just grabbed a bunch, leaves and all and threw them in a ziplock bag and put them in the back of the refrigerator. And forgot about them.

The next spring, while giving the fridge a much needed clean, I ran into my bag of rotting leaves and noticed that the seeds were busy germinating.

Jack in the pulpit like most native plants like to have a cold period called stratification, before they germinate.

I grabbed the seeds, forgot about the fridge and planted them. Within a couple of weeks the seedlings were up and growing. I had them in a bright window. I let them grow for a while then transferred them to a cold greenhouse. I'm lucky my pool is enclosed in a plastic cover that makes a perfect seed growing area when the snow is off the ground and it's warmed up a bit. 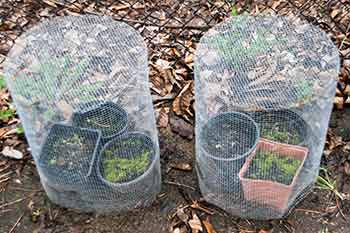 Once they looked robust enough, I transplanted the seedlings to larger pots, and put them in mesh cages. I used 4 and 6 inch pots. I had made the mesh cages to keep the squirrels from eating my strawberries and they worked well. The squirrels like to go dig in nice newly planted pots. They often plant sunflowers and hickories as they hide them.

Next step was to put the pots in a bright shady spot, water them occasionally and ignore them. By end of summer the little plants had disappeared and I figured they had died. 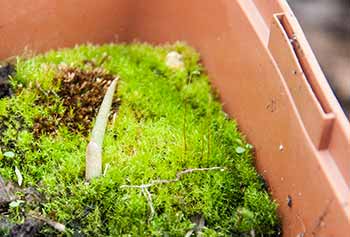 Come mid spring I went around getting rid of various pots where I had annual plants that were dead after winter and as I was checking the pots in the mesh cages I noticed that within the enthusiastic weed cover, the little jack in the pulpit spikes were coming up. Almost all of the little plants came back up!

I did some careful weeding and put them back under their protective mesh. I will re pot them in larger pots come fall.

Jack in the pulpit have a complicated sex life. A seedling grow three to six years in a pre-reproductive, vegetative state, leaves but no flowers. When the corm has reached a sufficient size, the plant will flower but the first flowers produced will be pollen producing male flowers. Later a gradually larger plant will transform into a female and produce seeds. If conditions are bad the female plant can revert back to less demanding male or vegetative state. 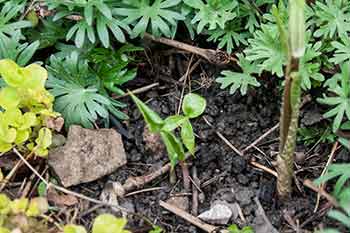 This photo shows a Female plant just unfolding leaves, and 2 small wild seedlings. They are probably the same age as my little plants.

It will be 3 or more years before they are strong enough to flower. Growing Jack in the pulpit is not for anyone expecting instant gratification. The plus is that they are tough and will tolerate some difficult conditions and are mostly care free once established. I'm growing mine to add to the wild plants that are being choked off by invasive plants. That's the only maintenance I plan to do.

Jack in the pulpit also reproduces by making buds or cormlets on its corm. These cormlets grow vegetative plants and eventually in a few years the corm becomes large enough to produce female flowers and reproduce sexually.

Digging up wild flowers is frowned upon because they often don't make it in a different spot. In the case of my plants, the soil is so rocky that it would be very difficult to extract a corm without damaging it. It's better to buy corms if you want flowers quickly. 5 Jack-in-The- Pulpit, Indian Turnip Bulbs (Arisaema triphyllum)

If you are in Canada you can buy Jack in the Pulpit Corms from Fuller plants. 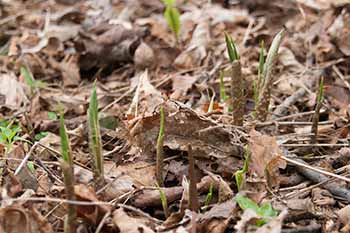 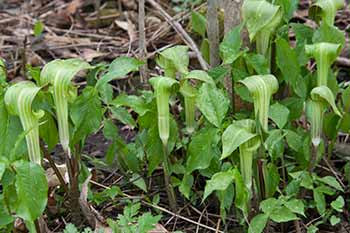 Jacks grow and flower quickly, in Mid-spring, about the same time as trilliums and trout lilies are flowering and just after blood root have done their flowering, they are sending out their leaf spike that quickly unroll. A couple of weeks later the flowers are fully out. 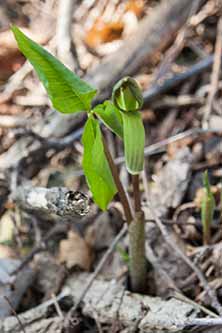 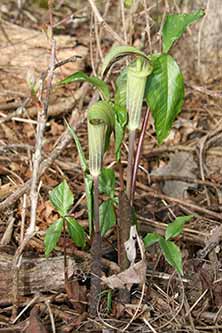 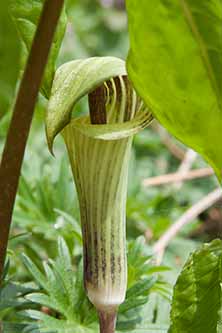 They are plants that grow under the canopy of trees. They need some sun in the Spring and like some bright shade in the summer. Mine are shaded by shag bark hickories and a smallish black walnut. They don't seem to mind the walnut. Some plants can't survive near them but I have several growing happily under walnut trees.

I'm told they like nice soil rich in organic matter but that's a luxury they are not getting here. When I plant mine out I'll give them some nice soil though.

The flower starts out as a quite pale green and gradually dark purple/brown stripes become more prominent. These plants are one of my favourite spring flower.

This information is for general knowledge. Jack in the pulpit is poisonous, don't eat it unless you know what you are doing. Don't pick it just for fun. This will weaken the plant and gradually it will die.

Penn State University article on Jack in the Pulpit


Self sufficiency on 1/4 acre

Korean digger. I love mine