Hostas are Beautiful and Well Behaved!

Do you have a shady spot that could use a bit of help? Hostas might just be the drama queens you're looking for.

Hosta is a genus of about 23-45 species of lily-like plants in the family Asparagaceae, subfamily Agavoideae, native to northeast Asia. They have been placed in their own family, Hostaceae (or Funkiaceae). Many of our hostas come from China, Japan and also Korea.

Hostas are herbaceous perennial plants, growing from rhizomes or stolons. They come in a wonderful varieties of greens, gold, almost blue and variegated colours.

Hostas vary wildly in size. There are almost miniature varieties which stand only a few inches tall to huge hostas that can reach 4 feet in height. 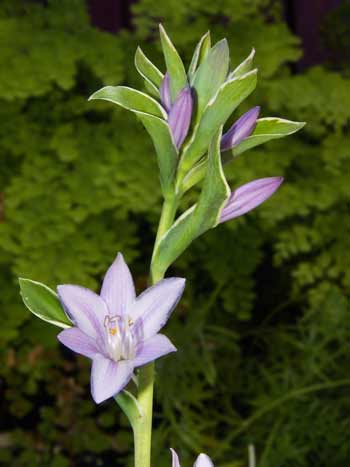 Hybridization has created thousands of cultivars. If you want to experiment get 2 different plants and cross pollinate them using a soft paintbrush. Do it early in the morning otherwise the bugs that do this normally will beat you to it. When the seeds grow you will see different varieties showing up.

Hostas flower at the end of terminal racemes, spikes that grow up from the plant. The flowers are blue, purple or white and have not much scent. The hosta flowers can be quite pretty or almost insignificant. After flowering, if the plant was pollinated, a seed pod is created.

You can collect and grow the seeds, but don't expect the seedlings to look like the parents!

A zebra can't change its stripes but a Hosta can! 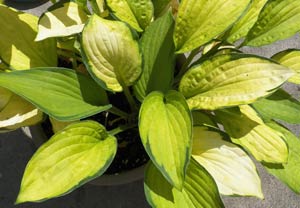 The colour of a hosta plant is not constant I've noticed. It can vary from year to year and change in one season. I'm not sure why a plant changes its marking over a season but it happens, ... really, I saw it.

This hosta started the season as a most pale yellow plant. That's what it was last year to. It is now growing greener and darker leaves. The hosta has been in the same spot in the same conditions.

Hostas are very safe and are regularly eaten in Japan and China. Sometimes the leaves and sometimes the roots are eaten. Here is a link on cooking Hostas 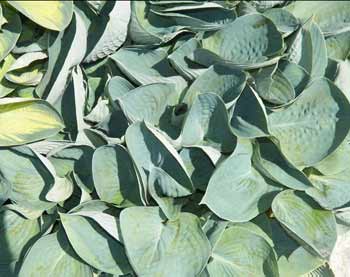 Not all hostas are easy to grow. I've found that very pale white and green variegated varieties and the paler yellow ones are slower and less robust than the darker green or blue ones.

Ideally they like a moderate amount of sun but hostas can happily tolerate quite a lot of sun and of shade. The yellow and mostly white leaves prefer more light. My most successful hostas have lived either in areas of filtered sunlight, or in areas where they got sun in the morning or in the evening and were shaded during the hot part of the day.

More important they like regular watering. When I lived in Korea the summer received lots of water, one week saw a full meter fall! That was unusual but regular rain is the norm. Hostas are not particularly drought resistant. 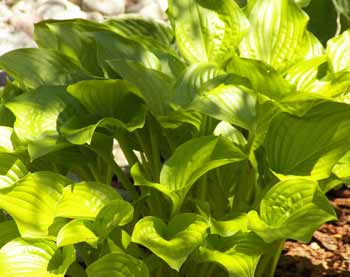 Too much dampness can cause them to rot particularly if they have been attacked by slugs. it's always tricky to keep something moist but not give them wet feet.

Hostas like slightly acid conditions and a soil mixture that has peat added works quite well. Sandy or Clay soils need to be modified so that sand holds enough water and clay allows more air. Humus and Peat are good choices as additive for Hostas. 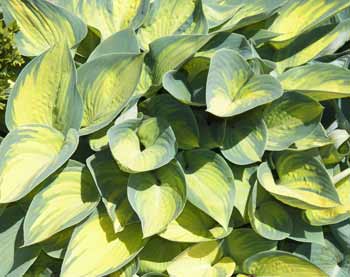 Hostas are quite energetic growers and need to be fed regularly. I like the convenience of slow release fertilizer. They tend to be more expensive but save trouble during the season.

Mulch is a good addition and helps keep hostas moist but some mulches such as leaf mulch, are ideal homes for slugs.

Hostas need moisture and so if you plant them alongside trees or other thirsty plants they will not be able to compete very well. You can get around this by planting the hosta in a large pot and planting the pot under the tree. In that case water regularly. 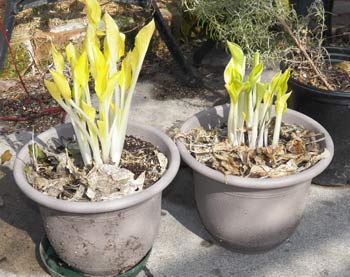 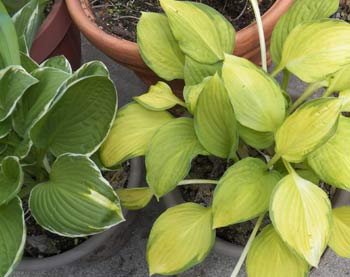 Hostas fresh out of the cold room and after a month.

All my hostas grow in pots and they are difficult to overwinter. Typically the spring freeze and thaw cycles kills them. Last year I tried bringing them in late in the season and keeping them in the cold room. This was quite successful. The Hostas must have a built in clock though because come late April they perked up and started growing quickly in the dark. I brought them out of the cellar and put them out during the day, then in at night, when there was frost. This worked quite well. They went from pale almost colourless to normal in a week.

Hostas are herbaceous and die back each fall after the first frost. I like to clear off the dead foliage before bringing them down to the cold cellar. I hope that this helps the plant from getting mouldy.

The yellow variegated one was slower in getting started in the spring but it's doing well after a couple of months of growth.

Hostas in the ground are quite hardy (zones 2-10). Again some varieties are hardier than others and a drive around and a talk to your garden store will provide a list of likely hardy Hostas. 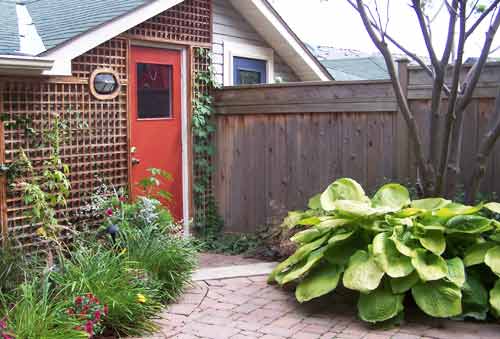 With the flower spikes this hosta was over 4 feet tall. Huge leaves make a great showpiece.

Even though hosta flowers are not particularly spectacular they will attract hummingbirds. The little birds like to check mine out when they do their rounds or are heading to the feeder. 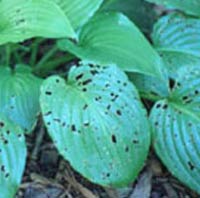 Slugs are by far the greatest threat to your hostas. Limiting the amount and type of mulch will help. Picking out slugs will help.

Not only do humans like hostas but slugs adore the taste and can reduce a plant to lace in just a few evenings. Many techniques for controlling slugs have been tried.

Pesticides exists to kill slugs on hostas, but I prefer the more time consuming but safer methods.

Since my hostas live in pots it's not terribly difficult to find any slug and remove it. During the day they like to hide on the ground under dead leaves and humus, or hide between leaf stems. During the evening and early morning they are busy eating and can be found chomping away on your hostas.

Some people report success using eggshells, copper wire mesh around the plants, saucers of beer, and diatomaceous earth among other things. If anything worked really as well as they say there would not be so many suggestions! I seem to have a resident garter snake in the hosta bed and I'm guessing that slug is part of a garter's balanced diet. I don't seem to have a slug problem these days!

It appears that slugs don't like to walk across copper so there are a number of manufacturers who are offering copper tape, collars and mesh to surround your hosta and make it harder for the slugs to get to it. Here's one example: Copper Slug Tape

I don't have any deer around these days but I'm told they really like hosta too.

Sometimes voles will develop a liking for hosta root salad. Letting your cat patrol the hosta will help keep voles in control. You can use mouse traps too. Planting the hostas within wire mesh helps keep the little rodents out.

I've read about foliar nematodes but not seen them. These are tiny worms that infest hosta leaves between the veins. Eventually the leaf dies. Keeping the area around the plant clean is the best control.

There is a kind of a rot called Crown rot that occurs if water sits on the plant in the cold spring. Sometimes the plant just can't seem to get started in the spring and when you look you can see that the inside leaves just fall out when you pull them. There is no cure by the time it gets to that stage. Your plant might make it if you get it dried out and not standing wet and cold.

If your hosta looks all twisted around and the leaves develop funny shapes the plant could be infected with Hosta Virus X. There is not much you can do. Best to pull out any infected plant and wait a couple of years before putting a hosta in that location.

Voles and other rodents can do a lot of damage and sometimes the only solution is to plant your hosta inside a mesh pot. Voles are not great climbers and prefer not to. This works but limits growth and is a nuisance to dig up. 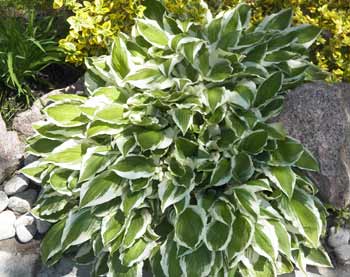 By far the easiest way of getting more hostas is by root division. The hardier hostas can be divided pretty much anytime as long as there is enough moisture during the recovery stage. Other hostas are best divided early in the fall or in the spring before they have dome much growing. This gives them a chance to recover before the frosts or before starting to seriously grow for the summer. WikiHow has a step by step article on how to divide a Hosta.

Hostas produce seeds and these will grow to make baby hostas, not too surprising. What is a surprise is the variety of babies that come up. They rarely look like their father OR mother. Many hostas have been developed from different parents so for the most part anything goes with the babies. Usually seedlings will not have the parents fancy foliage colours. They tend to be plain rather than variegated.

it's a simple matter of collecting mature seeds and planting them in moist but not wet pasteurized soil. The soil is pasteurized to kill mould and bacteria that could kill the seedling or rot the seed before it comes up. Keep everything in a warm spot and babies should start appearing in a couple of weeks. House temperature are suitable. One way is to get the seeds sown and put them in a plastic bag until the seedlings appear.

Baby hostas will change colour as they mature and it might take a couple of years before they really have their colours.

I try to be accurate and check my information, but mistakes happen.

email me if you find mistakes, I'll fix them and we'll all benefit: Christine

The Gardener's Guide to Growing Hostas

Hostas: An illustrated guide to varieties, cultivation and care, with step-by-step instructions and more than 130 beautiful photographs

This information is for general knowledge.