They are popular in the Mediterranean countries.

People who like them speak eloquently of the nutty flavour. I thought it was worth a try.

Unlike artichokes, cardoons stems are eaten, not the flower.

Why bother growing them instead of artichokes? They take less time to produce an edible crop. Artichokes are not enthusiastic about flowering in more northern areas and have to be tricked with a cold treatment of the seedlings in order to convince them to produce the delicious flower heads. Check out my Growing Artichoke Page 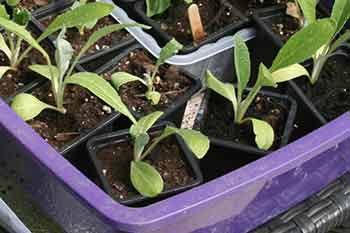 I planted the seeds in early april and they came up with no argument in about a week. Germination was good. I have a covered pool enclosure that makes a good greenhouse. Not very warm but above freezing and sunny. 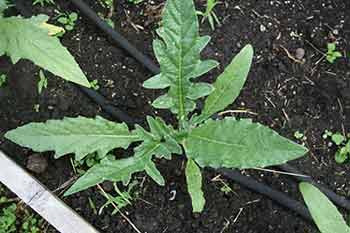 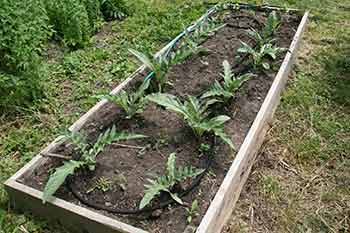 When the weather warmed up some, I put them out in a raised bed.

They settled in with no problem and started growing. They were not lightning fast but they made steady progress. 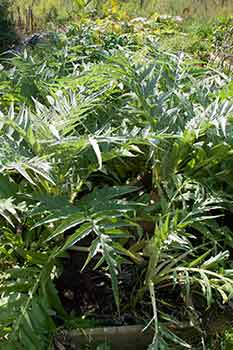 I had a little toad living in the bed, I don't know what he ate but he stayed there most of the summer.

I had planted them with the recommended distance between plants and I thought they looked a bit crowded.

It is quite a handsome plant with the grey green leaves and when they flowered, the large purple thistle like flowers. 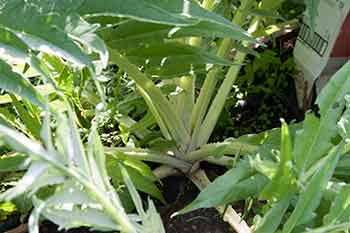 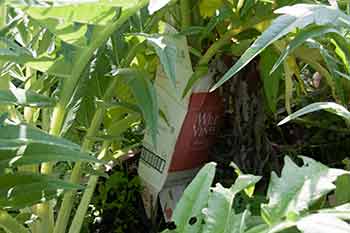 By August I had a bedful of robust plants with good sized stems. I tried eating a few stems but they were quite fibrous.

As recommended I wrapped the lower stems to blanch them. I used cardboard boxes flattened out. I only did about half of them.

Blanching them makes the stems grow longer and go pale and more tender. It's done with celery as well. 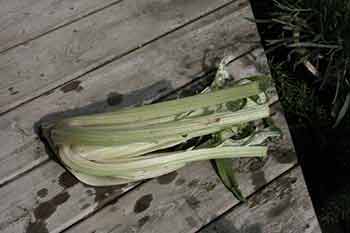 After a couple of weeks the stems had lost some colour and gotten longer. I harvested one plant and took a good look at it. There were still some stringy spikey bits on the outside of the stems and large strings in the centre of the stem, like celery sometimes has but coarser, so I peeled them. Peeling them is not particularly difficult but it was time consuming and since the leaves are quite flat, I did not gets a whole lot of leaf to eat after quite a lot of work.

How to prepare the Cardoons 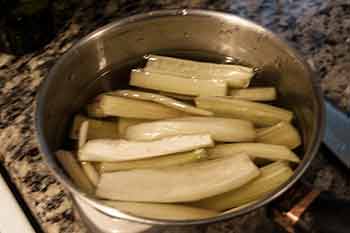 Various recipes say to soak them in cold water with a bit of lemon and salt for 15 or more minutes to get rid of bitterness, then boil them till just tender, this can take 20 to 45 minutes. At that point they are ready to be used in "your favourite recipe" or stored for a couple of days. The cardoons are flavoured often with butter, salt and pepper and used often cooked with cheese "au gratin".

Here is a link to Food and Style which describe very nicely the pleasure the writer had in finding cardoons and preparing them.

And the taste, you might ask? Quite forgettable I would answer. Of the much touted "nutty flavour" not a hint. It tasted of salt and pepper and butter, nice but so are potatoes.

Here is another link to make a "Quick and Easy" Gratineed Cardoons.

What about the flowers, can they be eaten like artichoke? 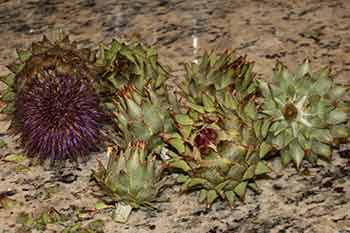 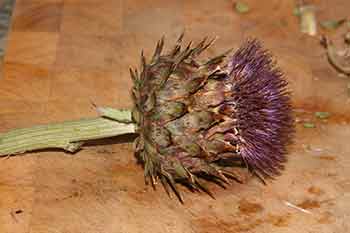 One plant started flowering so I decided to see if the flower would be as delicious as artichoke are. They look very similar, just slightly more prickly. 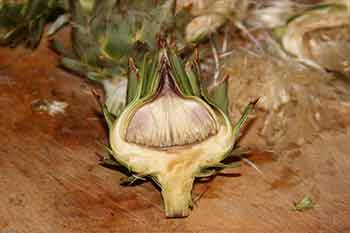 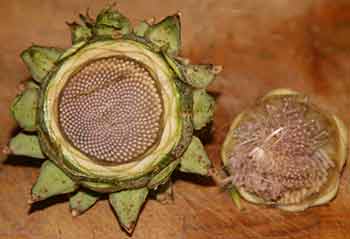 I cut one open to see what it looked like inside. I choose the largest flower that would probably be the most tough anyway. Tough it was and very woody. It was quite pretty inside though.

Since this flower was so tough I chose a smaller one and tried to cut it as well. it was no better and no amount of boiling was going to get me a meal of the flower. I guess you can't eat the flowers, even when young. 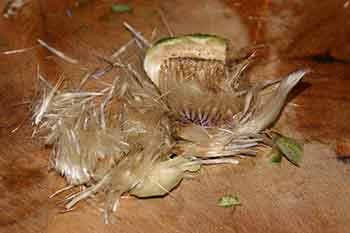 When I cut the smaller flower, the choke came apart. It was much tougher than the artichoke flower.

Would I grow Cardoons again

NO! NOT AS A VEGETABLE! MAYBE AS AN ORNAMENTAL PLANT.

The plants take a lot of space, are troublesome to prepare, and tasted no better than nicely flavoured cardboard.

I tried them raw but they are quite bitter, they need the soaking and boiling.

The plants are pretty and easy to grow so they would make an interesting decorative plant.

As a vegetable it is quite marginal. Fun to try and interesting but not much reward for the work and space if you don't count the entertainment value. Try one plant just to see. Grow artichokes for flavour.

As an ornamental it has it's place. If you live in a warmer area where the seeds might have a chance to ripen, then the plant can reseed itself, In my area 5b I get mature seeds at the end of the summer. Be careful it can become invasive if the seeds are allowed to mature. It's not a problem further north but California has some trouble with wild cardoon. Here is a link to my page on Plants that Attract Butterflies, Cardoons get their share of bees and butterflies

This information is for general knowledge. Some people love cardoons but I had not much luck cooking with them, they grew fine, but tasted quite bland.

Bitter: A Taste of the World's Most Dangerous Flavor, with Recipes