Taking a look at Okra Slime

When Okra is cut the sap is quite slippery. When Okra is cooked however the cooking water really gets super slimy. It's this characteristic that gives okra one of it's name GUMBO. It is used in Cajun and New Orleans cuisine to thicken such dishes as chicken gumbo.

I'm a curious person and decided to make some slime and check it out. My first step was making slime. 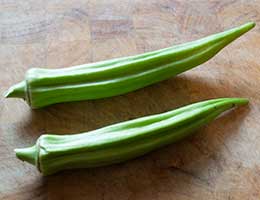 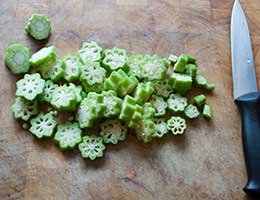 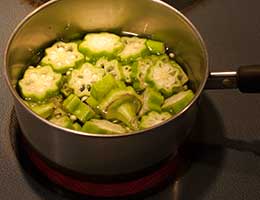 I cut the okra and added some water. For 2 pods I added about a cup and a half of water.

I cut up my 2 large pods and put them in a small saucepan.

Freshly cut okra is a bit slippery but to get really goopy it needs cooking. 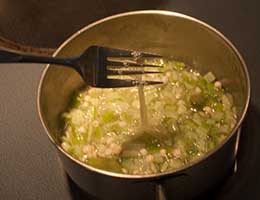 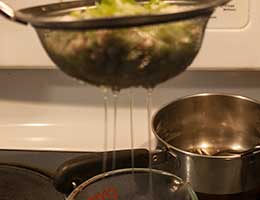 As it cooked the liquid quickly got really thick and goopy. After about 5 minutes, I mashed it with a fork to release as much of the sap as possible. Not much changed after the 5 minutes so I let it cool and strained it. It made most satisfying strands.

Could okra slime be a glue? 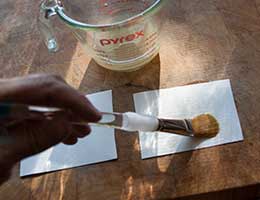 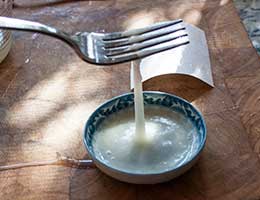 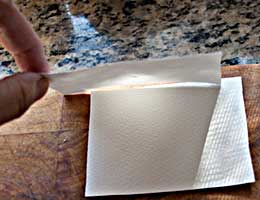 The slime feels very sticky and this made me wonder if okra slime might be used as a glue.

The slime feels very slippery it would make a great lubricant if it was not water soluble. It took quite a lot of washing to get it off my hands.

I brushed it on paper and tried gluing 2 sheets of paper. When that did not work I tried putting a really thick coat, but this was no improvement.

I made up a wheat flour paste and used that to test that the paper was not the problem. It worked perfectly well and the paper was solidly glued after drying.

I tried a mixture of wheat paste and okra glue. It failed.

The Okra slime was completely useless as a glue. 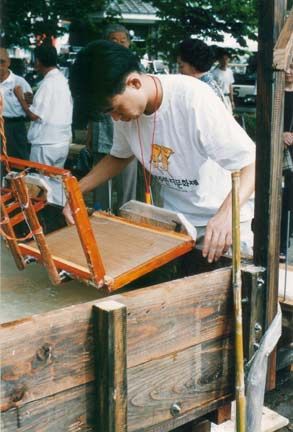 In one of my other lives, I taught English in Korea. There, during a cultural festival, I saw handmade paper being made. Hangi is mulberry bark paper, it is made much as Japanese paper is made. The bark is gathered, cooked in an ash / water bath, cleaned and pounded. The resulting pulp is placed in a water bath along with a hibiscus root extract. This slimy gummy material is extracted from a plant that looks very similar to Okra and I certainly can feel no difference in the "slimyness"

A while ago I documented this process. Here is a link to my Korean paper making page.

At the time they had described the extract as a glue, but I think it is really a dispersant that keeps the fiber slurry in suspension and stops the fibers from clumping and becoming unevenly distributed. Their English was no better than my Korean so the details were sketchy. I remember the water solution was somewhat thick and I now wonder if this was because of the thickener.

I think that the Okra slime would work as a perfectly acceptable substitute.

NOTE: I have since been able to find several references to OKRA in Korean and Japanese style papermaking. It has been tried and it does work! 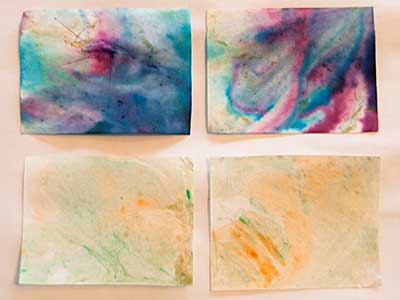 In the process of marbling paper, a thickener is used in a water bath. This helps support the inks that are then dropped and mixed on the surface. Historically Carrageenan gum extracted from seaweed has been a very useful thickener. I wondered if Okra slime, another mucilage, could also be used.

I did a quick experiment using 2 different types of inks. These I dropped on my Okra slime. I used a skewer to mix the colours and get a pattern. I think a thinner mix of slime would have worked better. It was too jelled to make good patterns.

Judging from my 15 minute experiment I think Okra slime could be made to work. I had not prepared the paper at all and the thickness of the slime was too much for easy mixing. Still it's encouraging.

Okra slime is easy to get and not at all expensive compared to some of the other thickeners.

What is Okra slime anyway?

Okra slime, is a pectin like substance, referred to as mucilage, and is not unique in the plant world. Many Plants produce mucilage and some such as Aloe Vera, Okra, Irish Moss, Kelp (used to thicken ice cream), Psillium and many cacti and flax produce a lot. The gelling quality of these substances is due to the framework of links in the slime. A very small amount of dry mucilage will have a great deal of effect and be able to gel a large amount of water.

Seeds use mucilage to capture water and aid in germination by keeping the seed moist.

It is composed of complex sugars called exopolysacharrides and proteins called glycoproteins. Heat increases the viscosity so it's no illusion that cooking the Okra makes it more slimy.

Glycoproteins are proteins that have sugars attached to them. They are common in the human body, and have diverse functions in the immune, digestive, and reproductive systems.

Plant mucilages such as Okra and Slippery Elm have been used to fight gastritis. It's effectiveness is due to the polysaccharide that inhibits the adhesion of Heliobacter pylory to stomach tissue. Here is a link to an article on this. From the US National Library of Medicine

Mucilages have a long history of soothing sore throats and stomach by coating them with a protective layer. Mucilage from the Aloe Vera plant is used to coat tissues with a protective coat and helps heal injuries such as burns.

I had no idea how interesting the okra slime would prove to be. This page is just a sampling of the reading and experiments I did. Gels and mucilages are fascinating substances.

I think another use which would be fun to explore is as a personal lubricant. It would be prone to going bad so the gel should be used fresh.

This information is for general knowledge. I am not a chemist or doctor. My experiments are not formal research projects and my results are just observations. Medicinal uses of Okra is not to imply proper medical help should not be sought if required.

The Practical Guide to Marbling Paper